This is the Spektrum DX4C DSMR 4-Channel AVC Radio System, with an SRS4210 Receiver. The DX4C DSMR 4-Channel AVC surface radio system puts the power of a Spektrum 2.4GHz computer radio and the stability of AVC (Active Vehicle Control) technology well within reach of the most budget conscious driver. When AVC technology is in use, the first two channels of the DX4C operate steering and throttle. The second two let you independently adjust the amount of steering and throttle assistance AVC technology provides. This makes it easy to dial in the perfect amount of stability for different types of surface conditions and terrain.

AVC (Active Vehicle Control) Technology
Using sensors and exclusive software, patent-pending AVC technology calculates a vehicle’s attitude many times per second and makes instantaneous corrections to steering and throttle so it stays precisely on the trajectory you command. The amount of steering and throttle stability provided can be adjusted to suit your skill level or driving style. Best of all, driving with AVC technology feels completely natural. There is no lag in response or limits on your control. You simply feel like you’re driving a finely tuned vehicle that handles beautifully at every speed.

DSM – Frequency-Agile DSMR Technology
The DX4C is built around frequency-agile, DSMR 2.4GHz technology. This exclusive Spektrum technology can be used in any type of surface application. Its range and response, particularly in noisy 2.4GHz environments, are superb. It’s also backwards compatible with DSM2 Spektrum receivers. Longtime Spektrum users won’t need to replace the receivers they have unless they want the frequency-agility of a DSMR receiver or AVC functionality.*

SRS4210 AVC Receiver
The waterproof SRS4210 lets you add the advantages of AVC technology to any RC car, truck or buggy.* It does so by combining the superb range and signal security of a 4-channel DSMR receiver with an AVC system in a single, lightweight unit. Installation is easy and no complex setup is required. Simply bind it to a Spektrum surface transmitter that’s compatible with AVC technology and calibrate. 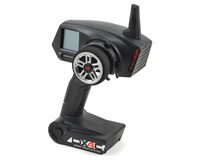